A Japanese Alchemical Chart of the Human Body 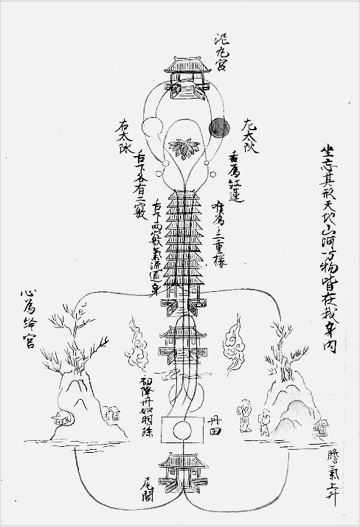 The Japanese alchemical chart of the body reproduced on this page is entitled Shūshin kyūten tandō zu 修真九轉丹道圖, or Chart of the Way of the Elixir in Nine Cycles for the Cultivation of Reality (the Chinese reading of the title is Xiuzhen jiuzhuan dandao tu). Although no precisely corresponding picture seems to be found in Chinese texts, it is likely that this chart is either copied from, or based on, an earlier Chinese exemplar that may now be lost.

The Chart, which is undated, is now kept in the library of Tenri University in Japan. It is reproduced here from the book by Katō Chie 加藤千恵, Furō fushi no shintai: Dōkyō to "tai" no shisō 不老不死の身体 — 道教と「胎」の思想 (The Ageless and Deathless Body: Taoism and the Idea of the "Embryo"; Tokyo: Taishūkan shoten, 2002), p. 121. Dr. Katō is one the main Japanese scholars of Taoist Internal Alchemy. She has published extensively in particular on the Wuzhen pian (Awakening to Reality) and on the Taoist views of the "embryo."

Description of the Chart

Like most similar Chinese pictures, the Chart contains short captions. Below are translations of the captions, with short notes:

1. "As I sit and forget my form (xing), all the mountains, the rivers, and the ten thousand things are within my body". The word used here for "body" is shen 身, which denotes not only the physical body, but the whole person.

2. "The Breath (qi) of the gallbladder rises above". 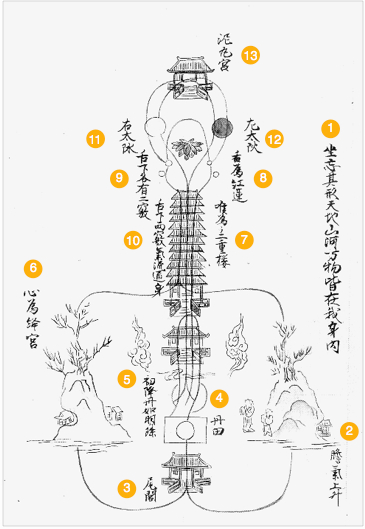 5. "At its first descent, the Elixir is similar to a Luminous Pearl." This sentence refers to the first stage in the formation of the Elixir, i.e., the first of the nine cycles mentioned in the title of the Chart.

6. "The heart is the Crimson Palace" (jianggong). The middle Cinnabar Field, commonly called Crimson Palace, is shown at the center of the picture.

7. "The throat is the Twelve-Storied Pavilion" (shi'er lou). This is a common name of the trachea in Neidan and meditation texts.

9. "Under the tongue, on each [side], there are two openings". These openings are the Cinnabar Cavities (danxue), which should be kept closed by the tongue so that the True Breath (zhenqi) does not escape.

10. "Through two [of the four] openings, Breath (qi) flows and pervades the body".

11. "On the right the Great Yin". This caption and the next one refer to the eyes. The right eye represents Great Yin.

12. "On the left the Great Yang". The left eye represents Great Yang.

Although its origins and transmission deserve more study, the Japanese Chart appears to be closely related to a work attributed to Chen Nan (?-1213), a Neidan master belonging to the Southern Lineage (Nanzong) of Internal Alchemy. His Cuixu pian (The Emerald Emptiness), which is part of the Xiuzhen shishu (Ten Books on the Cultivation of Reality), contains these verses:

The result (gong) of the first cycle is similar to a Precious Pearl;
mountains, rivers, and the whole cosmos pervade the Numinous Body.
Under the petals of the Red Lotus are stored the Cinnabar Cavities;
the Vermilion River flows and pervades the Pearl of the Nine Times.

● Xiuzhen tu (Chart for the Cultivation of Reality)

(According to Chen Nan's own explications, the "nine times" in the fourth verse refer to a form of breathing in nine stages performed after the Pearl of the Elixir descends into the Cinnabar Field.)

The True Water [generated] by [number] 1 of Heaven is stored in the gallbladder. When Yin and Yang conjoin, they descend [into the lower Cinnabar Field] and form the Elixir. At its first descent, its shape is similar to a Luminous Pearl made of one drop of dew.

Besides including the term Luminous Pearl, one of captions in the Chart (no. 4) consists of sentence that alludes to the final part of this passage. Finally, another caption in the Chart (no. 1) mentions the gallbladder.

(The words "The True Water [generated] by [number] 1 of Heaven" allude to Water, the first of the five agents, which is given birth by Heaven and is associated with number 1.)

Considering these multiple analogies, it is significant that the Cuixu pian is concerned with a Neidan process in nine cycles, which are also mentioned in the title of the Japanese Chart of the Way of the Elixir in Nine Cycles for the Cultivation of Reality. As for the words Cultivation of Reality, they may be a direct reference to the above-mentioned work that now contains the Cuixu pian.

The Way of the Golden Elixir

An introduction to Taoist Alchemy, from Waidan to Neidan. PDF, free download.