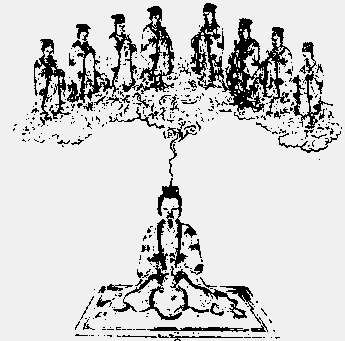 Meditation on the gods of the heart

In addition to the gods and goddesses who reside in heaven, a veritable pantheon of Taoist deities also exists within the human being. These deities fulfill various functions related to one another: they personify formless realities such as the Dao, Yin and Yang, or the five agents (wuxing); they allow the human being to communicate with the major — and in several cases corresponding — gods of the outer pantheon; they act as officers in the bureaucratic system that manages the whole body; they perform healing tasks by supporting the balance of the body's functions; and they are objects of meditation and visualization. The basic purpose of visualizing them is to "maintain" them (cun) in their proper locations, to nourish them with one's inner breaths and essences, and to invoke them so that in turn they provide protection and sustenance. This is said to result in health, longevity, or even immortality, and to defend one from calamities caused by demons and other noxious entities.

Gods of the Head and Viscera

The Taiping jing (Scripture of Great Peace) is the earliest text containing references to the gods of the five viscera (wuzang, i.e., heart, lungs, liver, kidneys, and spleen). Each god is represented as wearing either a single garment the color of the current season, or three layers of clothing related to the "breath" (qi) of the current season and the next two seasons. Systematic descriptions of the inner gods are first found in the "Inner" ("Nei") version of the Huangting jing (Scripture of the Yellow Court). In particular, this source mentions the gods of the head and the inner organs. The deities of the head reside in the hair, brain, eyes, nose, ears, tongue, and teeth. Their actions are governed by the Muddy Pellet (niwan, the upper Cinnabar Field) which in turn hosts nine more gods, the Nine Realized Men (jiuzhen), in its nine rooms.

The gods of the inner organs include those of the five viscera and of the gallbladder, an organ that represents all "six receptacles" (liufu) in the Huangting jing and in other texts. Each of these organs is called a "department" or a "ministry" (bu) and is managed by a god who resides in a palace within that organ. The different gods are identified by their names and by the colors of their garments (for instance, the god of the liver wears "a wrapping gown of green brocade"; the god of the spleen wears "a yellow gown"; and so forth, based on the associations with the five agents); by the function that they supervise in the body (regulating breath, digesting food, etc.); and by the corresponding part of the face on which they rule (eyes, nose, etc.). Other prominent gods mentioned in the Huangting jing are the Great One, who resides in the upper Cinnabar Field; Blossomless (Wuying) and White Prime (Baiyuan), in the upper Cinnabar Field; and the Peach Child (Taohai, also known as Peach Vigor or Taokang), in the lower Cinnabar Field.

The Red Child resides precisely in the ducts of the stomach, the Great Granary. He sits facing due south on a couch of jade and pearls, and a flowery canopy of yellow clouds covers him. He is clothed in garments with pearls of five hues. His mother resides above on his right, embracing and nourishing him; his father resides above on his left, instructing and defending him.

A different but related system is reflected in the Laozi zhongjing (Central Scripture of Laozi), where the scope of the pantheon is much wider and the nomenclature of the inner gods is, with few exceptions, different. Leaving aside a host of minor spirits mentioned throughout the text, the major gods are those described in the first twelve sections. They are represented as transformations of a single sovereign deity, the Supreme Great One (Shangshang Taiyi), who is the Original Breath (yuanqi) spontaneously issued from the Dao. He appears under varying names and forms, including the Lord of the Dao (Daojun) and Laojun (the deified aspect of Laozi). In several of these appearances, the Great One has as his spouse the Jade Woman of Mysterious Radiance of Great Yin (Taiyin xuanguang yunü). All these gods are said to reside both in the heavens and in the human being (and sometimes on earth as well); the usual formula that connects these different planes to each other is "human beings also have it", to introduce their placement within the body. The Dao itself resides in the human being as the Supreme Lord of the Central Ultimate (Shangshang zhongji jun). It is the individual "self" (wu), also called Zidan (Child-Cinnabar) or Red Child (chizi, see a picture).

The One as an Inner God

In the Baopu zi, one of the two types of meditation defined as Guarding the One (shouyi) is also based on visualizing the One — the deified aspect of Unity — as a god residing within the human being (the other type consists in multiplying one's "form" or in hiding it to escape harm caused by demons). Drawing from an earlier text, Ge Hong provides a short description of the features of the One and his multiple locations. According to this passage, the One alternately resides in each of the three Cinnabar Fields, and takes on different names and vestments at each of these loci. Shangqing Taoism later inherited the view of the One dwelling at different times in the Cinnabar Fields, and developed it into the notion of the Three Ones, each of whom permanently resides in its own Field.

Visualization practices such as those described above appear to have fallen into disuse by the Tang period, replaced first by the neiguan type of meditation, based on inner contemplation and awareness of mind, and then by Neidan (Internal Alchemy) practices, focused on the refining of one's inner Essence, Breath, and Spirit (jing, qi, and shen). Neither practice is based on visualization of gods, although the Neiguan jing (Scripture of Inner Observation) mentions several major inner deities in its model of the "perfected body."

However, visualizing the inner gods continued to play an important role in liturgy, where the priest summons his inner gods and dispatches them to submit petitions to Heaven. This function is attested from medieval times to the present day. Neidan has preserved visible traces of earlier practices in both of its best-known charts of the inner body, the Neijing tu (Chart of the Inner Warp) and Xiuzhen tu (Chart for the Cultivation of Reality). The Neijing tu includes divine beings in its representation of the "inner landscape" (even though they do not exactly consist in deities), and the Xiuzhen tu explicates its visual map of the "alchemical body" with passages related to the Huangting jing.