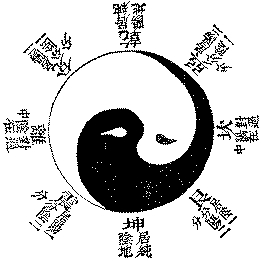 Yin and Yang and the eight trigrams
[see a larger image]

In Chinese cosmology, Yin and Yang are two opposite but complementary principles that regulate the functioning of the cosmos. Their continuous joining and separation is at the origin of the rise and the disappearance of all entities and phenomena in the world of the "ten thousand things" (wanwu), in which we live.

According to a famous statement, found in one of the appendixes to the Book of Changes (Yijing), "one Yin and one Yang, this is the Dao." These words refer to the Dao, which first determines itself as Unity and then gives birth to the two complementary principles. As each of these stages generates the next one, Yin and Yang are ultimately contained within the Dao itself. At the same time, the phrase "one Yin and one Yang, this is the Dao" refers to the continuous alternation of Yin and Yang within the cosmos. When one of the two principles prevails, the other yields, but once one of them has reached the height of its development, it begins to recede — and in that very moment, the other principle begins its ascent. This mode of operation is especially visible in the time cycles of the day (alternation of daytime and nighttime) and of the year (alternation of the four seasons).

● Yin and Yang in Internal Alchemy

Yang endows, Yin receives, the masculine and the feminine attend one to the other.

Cantong qi (The Seal of the Unity of the Three)

The origins of these notions are impossible to ascertain. It is generally deemed that the terms yin and yang originally denoted the shaded and sunny sides of a hill, and later began to be used in an abstract sense as cosmological principles. The earliest known text that contains a list of items arranged according to their Yin and Yang qualities is a manuscript entitled Designations (Cheng, found in Mawangdui), probably dating from the 3rd century BCE. Examples of Yang and Yin items, respectively, mentioned in this text include: heaven and earth; above and below; day and night; summer and winter; spring and autumn; man and woman; father and child; elder brother and younger brother; ruler and minister; soldiers and laborers; speech and silence; giving and receiving; doing and non-doing. 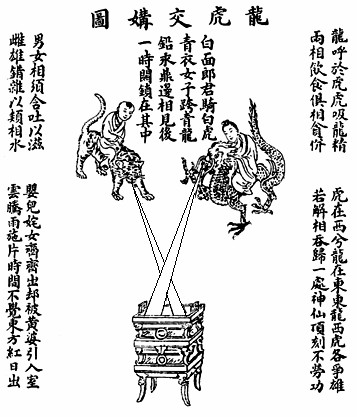 The conjunction of Yin and Yang represented as the conjunction
of the essences of the Dragon (Yang holding True Yin)
and the Tiger (Yin holding True Yang) in the alchemical tripod.
Xingming guizhi (Principles of Balanced Cultivation
of Nature and Existence), 17th century.
[See also another version of this picture.]

Between the 3rd and the 2nd centuries BCE, Yin and Yang became one of the pillars of the system of correlative cosmology. This system coordinates several sets of cosmological emblems with one another, including Yin and Yang, the five agents, and the eight trigrams and sixty-four hexagrams of the Book of Changes. Each of these sets is a particular way of explicating the features and functioning of the cosmos. For example, Yin-Yang and the five agents are correlated as follows:

The association of Yin and Yang with the five agents is at the origin of the view that Yin and Yang are further subdivided into two states each: "minor Yang" (Wood), "great Yang" (Fire), "minor Yin" (Metal), and "great Yin" (Water). [On this point, see a table of the five agents]

The relations among the different cosmological configurations that occur between the Dao and the "ten thousand things" are illustrated in the Chart of the Great Ultimate (Taiji tu).